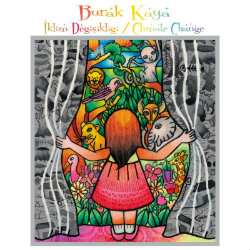 All compositions by Burak Kaya

When one says Climate Change, two opposing views come to mind. One is the catastrophe resulting from the global warming and bringing the planet to an end and the other is the change occurred in the opinions of the individuals who realized the end of the planet and have begun to question. Today we are at a junction where one of the roads leads to darkness and the other leads to a bright future. Climate Change is an album that opens its curtain to hope, like the marvelous painting by Trisha Co Reyes on its cover. From today’s standing point, it may look like a dream for individuals to change first the climate of their own minds at Gezi Park, Gerze, Hasankeyf, and then to change the order of the whole World by coming together like waves. Let it be.

If this dream is to be realized one day, it will be thanks to the most extended, most organized, most beautiful and egalitarian struggle that the world history has ever seen. If not, this struggle will be the most honored resistance and the most recent beautiful dream of humanity. 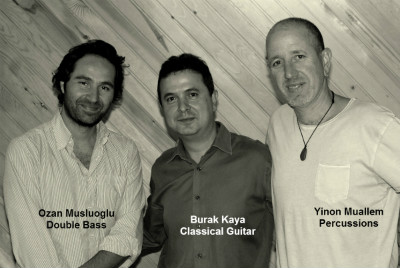 Activists, tells the story of environmental activists from different geographies of the world who have set off from their own region and fight for the future of the whole planet.

Gezi Park, tells of the Gezi Park, which would be demolished to construct buildings and those individuals who resisted this destruction. In the first part of the song the strong commitment of environmentalists is considered, and in the second part, the occupation of the park by the public participating into the resistance, and in the third part, the beauty of communal life established at Gezi Park is interpreted.

Hasankeyf is the only place in the world that meets nine of the ten criteria specified by UNESCO, even if only one criterion is enough to be enlisted in the World Heritage List. Unless someone says stop, Hasankeyf and Tigris valley will submerge under Ilısu Dam in 2015 with its history of more than ten thousand years. This is a song for Hasankeyf and Tigris.

Emek Movie Theatre, was built in 1884 by architect Alexandre Vallaury. It was destroyed in 2013 by those who said that they would build a more beautiful movie theater instead. A pathetic song for the historical Emek Movie Theater which was finally torn down despite the resistance to the mentality which instead of protecting cultural heritages, seeks to destroy historical buildings on the grounds that they are simply “old” and sinking.

HES Off is a song that tries to describe the vibrant rivers with its lively rhythm and tune changes. It depicts the wipeout of high waters and harmful effects of HES (Hydroelectric Power Plant) that plunders the forests, changes riverbeds and leave no water in streams even for animals to survive.

Tree Cutter Bridge depicts İstanbul’s Northern Forests with its oaks, chestnut trees, hornbeams, beeches, maples, hundreds of bird species, boars, foxes and waters flowing merrily in spring. The Third Bosphorus Bridge, its construction started in 2013, will smash these forests. Northern Forests is a vast region, stretching longitudinally from Black Sea shores to the city center and horizontally from Şile to Thrace. The best photos of İstanbul are always taken from here. When the region disappears, the biggest values of the city including Belgrade Forest, Polonezköy, Taşdelen, Alemdağ, Terkos, Ömerli, Istranca, Büyükçekmece, Alibeyköy and Sazlıdere will be sacrificed for rant. Like the previous bridges, transportation is the basic ground of those who want to build the bridge. This is a big lie: Bridges are built for vehicles, not for people. The number of people passing the Bosphorus Bridge increased 12% while the number of cars increased 257% in five years after the first Bosphorus Bridge was built. The number of people passing the Bridge increased 170 %, while the number of cars increased 1180 % after the opening of the Fatih Sultan Mehmet Bridge till today. The Link roads of bridges which had no settlement around once are surrounded by a concrete jungle today, which means that bridges are good for increasing the profits of automotive and construction sectors, real estate offices but not people’s comfort.

While debates about the name of the new bridge continued in 2013, a name for this bridge came to my mind that would destruct the forests sheltering hundreds of animal species and almost all water basins of İstanbul.

Climate Change, tells us how badly the planet is damaged by companies that exploit labor under neo-liberal politics, pollute the planet, glorify consumption and concretion rather than production and green areas and do not abandon fossil fuel. The first part of the song narrated the usual order and natural balance while solo part emphasizes the climate changes that occur as a result of global warming. Here, extreme climatic events such as droughts, floods, typhoons with unbalanced tunes, hard touches and strokes.

Gerze tells of Gebze residents who have been resisting for years against Anadolu Group’s coal-fired thermal power plant. The song begins with a mourning to symbolize the destruction that the power plant will cause and accelerates with a theme from the folk song “Ben Seni Sevduğumu Dünyalara Bildurdum” (I let the whole world know that I love you). Hard-won victory of Gerze residents after resistance against gas and truncheon is narrated with an increasing ambition until the end.